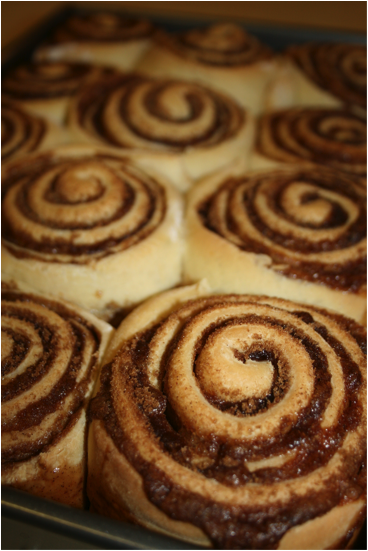 This recipe has become a calorie- and memory-laden tradition in my family; I hope you enjoy it, too!

6 cups (or a little more) flour

Time Needed: about three hours (including prep and baking)

1. Using a fork, quickly but thoroughly mix 2 packages of yeast, 2 tablespoons of sugar and ½ cup

of warm water in a container that can hold at least two cups of liquid. Set aside.

2. Combine 2 cups of milk, 2 eggs, and ½ cup of melted butter in the stand mixer on medium speed

scraping the sides of the bowl with the spatula as needed.

4. Pour in the water, yeast and sugar mixture. (Note that about a cup’s worth of bubbles should have

formed by this point.) Mix on medium speed until smooth.

6. Using a pouring shield if possible, add 6 cups of flour—half a cup at a time, using the lowest speed

on the mixer while pouring the flour, then a medium speed while blending the flour. Use the spatula to

scrape the attachment and the sides of the bowl as needed.

[Note: If the dough is sticky, add flour half a cup at a time until there is very little or no dough sticking to your hands after handling—due to the elevation in Provo, Utah I usually need to add an additional cup or so of flour.]

7. Lightly butter the large bowl. Then round the dough and place it in the bowl.

8. Cover the bowl with the clean dishtowel. Set it in a warm place, if possible (e.g. in sunlight from a

window—don’t pre-heat the oven just yet!). Let the dough rise until doubled in size, then punch down and let double again.

9. While the dough is rising, thoroughly clean a 34” x 18” area of counter space. Then sprinkle the area

with flour—three quarters of a cup should be sufficient.

10. In the medium bowl, mix together 3 cups of brown sugar and 6 teaspoons of ground cinnamon.

11. After the dough has doubled in size the second time, take it out of the bowl, place it on the floured area and roll it out into a roughly 34” x 18” rectangle.

12. Spread 1 ½ cup of softened butter evenly over the surface of the dough, then evenly sprinkle and

spread the brown sugar and cinnamon mixture over the surface of the dough.

[Note: If you do not have sewing thread, dental floss can be substituted, though mint flavoring could transfer. Cutting the sections with a knife is also an option, but is not preferable because it will squish the sections. The first and last sections can either be eaten raw or thrown away; they’re usually too small to bake properly.]

14a. For connected, softer cinnamon rolls (as pictured by ingredients), put about twelve sections in the pan.

14b. For separate, all-around browned cinnamon rolls, put about nine sections in the pan.

14c. Depending on the number of sections left over, either use a loaf pan or another 9” x 13” pan for the remaining sections.

15. Place the pans on top of or near the oven, cover with the dishtowel, and let the rolls rise while the oven preheats to 350 degrees.

16. When the dough has approximately doubled and the oven is preheated, bake for 15–20 minutes, or until the rolls are a light golden brown.

17. While the rolls are baking, use the flat beater attachment to mix 8 oz of cream cheese, ½ cup of butter and 1 teaspoon of vanilla extract in the mixer until smooth.

18. Using a pouring shield if possible, add 3 cups of powdered sugar—half a cup at a time, using the lowest speed on the mixer to blend in the powdered sugar (1 tablespoon of milk can also be added).

19. When the rolls are a light golden brown, remove the pan(s) from the oven, and set them aside to cool (because the rolls will continue to slightly “bake” and darken after removal from the oven).

20. Remove a roll (or two!) from the pan, top with a dollop of icing and enjoy with a glass of milk!

Author: Stance Studies on the Family
Filed Under: Uncategorized
Tags: cinnamon rolls, General Conference, holidays, motherhood, recipes
Mother Gardener
How to Get Your Kids to Listen without Reminding or Yelling