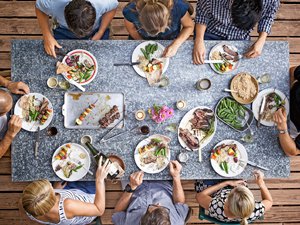 by: Jamie Bjazevich Without any explanation needed, almost everyone knows the taboos of family dinner conversations.Eating together can be a bonding and unifying experience so naturally we avoid topics that could be sources of dispute—politics included. While we might still have a bad taste in …

Food & Culture
-
by Stance Studies on the Family
-
0 Comments

A: Articulation Makes all the Difference in Marriage

In addition to merging traditions, articulation is another important aspect of the transition to marriage. The New Oxford American Dictionary defines articulation as “the action of putting into words an idea or feeling of a specified type.” Articulation can create some of the most beautiful …

Dating & Marriage
-
by Stance Studies on the Family
-
1 Comment

Provo, Utah, is known for its obsession about dating matters, and for good reason. When you stick a group of thousands of Latter-day Saint (Mormon) young adults together who are all trying to get married, you can expect to hear about dating.

Being surrounded by dating talk, I was instantly curious when I heard about a dating lecture that would take place on campus. Professor Holman was to reveal his exclusive results from a study he conducted on Provo dating life.

I sat in a crowded room at the Joseph F. Smith Humanities Building at Brigham Young University, awaiting Professor Holman’s lecture. I nervously sat in the back of the crowded lecture hall, not wanting to be seen in such a laughter-inspiring situation. As I sat, I watched dozens of people enter the room: couples holding hands, groups of girls, and even some curious guys. I overheard a married couple in front of me say they were there for extra credit. Having already successfully navigated Provo’s complicated dating scene, why else would they be at such a lecture?

Professor Holman started out the lecture by saying that he wouldn’t be staying for the viewing of The Princess Bride following the lecture, because he was going home to his own “princess bride.” The crowd let out a coordinated “aww”—or at least the females in the room did.

Professor Holman then explained that his team had spent the last several months studying Provo dating life. A group of young adults had been selected to have their dating life put under a microscope and revealed to the student body. These research subjects had agreed to send weekly texts on the status of their relationship (such as “I’m dating someone,” “I just broke up,” or “I went on a first date”) over the period of several months. A few participants were also given weekly interviews on their thoughts on dating.

With all of these results, the professor and his team found that Provo dating is not how dating used to be. Apparently there are no clear signs understood by everyone that indicate how the relationship is progressing. Generally, a guy and girl who like each other will increase time spent together, until they decide they want to date. This mutual like could be communicated solely through physical affection (bad) or through communication (good).

The research team also found some interesting dating quirks of their research subjects. They humorously grouped their subjects into several sociological categories. The girls fit into three groups:

Flirtatious Girls: These are the flirtatious girls who base their self-esteem off of how many guys like them. If this girl likes you, you will KNOW. Unfortunately, they probably like 10 other guys as well. The tough thing with dating these girls is convincing them that you are the best guy around and that you are willing to treat her better than the other millions of guys she’s after.

Lock and Key Girls: I heard this description and immediately thought “Oh my gosh, it’s me!” These girls are relationship avoidant. They are independently minded and have high (sometimes too high) expectations. If one of these girls likes you, good luck—there is no way you will know. Just ease into the relationship slowly and convince her you are worth it.

Stable Girls: These girls are comfortable with dating. They will open up to guys and share their feelings and are willing to go through the dating process without rushing it.

As for the guys, there are three groups as well.

Emotional Guys: When they go too far, these types of guys can be perceived as creepy or stalkers. Really, though, these are some of the sweetest guys you’ll meet because they’re very dedicated to dating. They feel rejection really hard. When they hear from general authorities that they should be dating, they feel guilty and get to work! But maybe too much work.

Closed Off Guys: These guys don’t try very hard to date. When they hear from general authorities they should be dating more, they think, “They’re referring to someone else,” or “I would love to date more, but I have too much homework.” Then they lock themselves in their apartments on Friday nights and play video games.

Stable Guys: These guys are willing to go through the dating process. They don’t jump into a relationship too fast, but they also don’t avoid dating. They move on after a rejection or a break-up and keep trying. And eventually, they win (find a wife, that is).

Professor Holman and his team said that no one fits perfectly into one of these three categories. Nevertheless, the characteristics of each category seemed all too familiar. So what can you do about these dating weaknesses? Well, there is hope. Apparently you can change your attitudes about dating. If it goes right, dating leads to marriage, which leads to family, which leads to life-long (and eternal) happiness—even though there may be a lot of bumps along the way.

I walked out of the lecture a bit frustrated by my lock and key ways, but determined to change them. Provo dating, here I come!