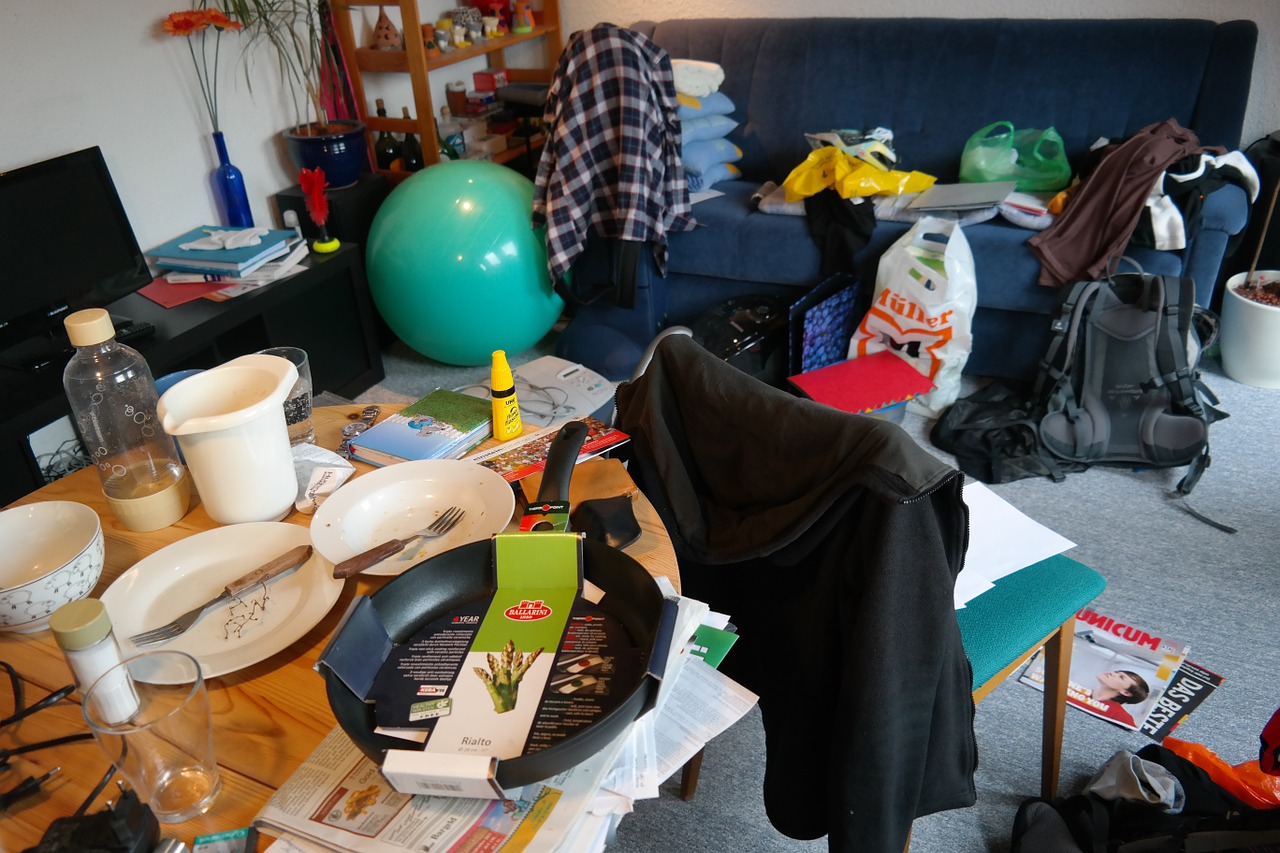 Yes, I grew up in a clean home; however, it wasn’t my mom’s or dad’s desires to have a clean home that made me a clean person today. In fact, while growing up, I had one of the messiest bedrooms out of all my siblings, except maybe occasionally one of my brothers would out “messy” me. My dad would even use a hurricane scale to rate the messy level of my bedroom.

“That’s definitely a hurricane class six in there!” He would say.

So, I bet you are curious to figure out why I’m such a clean and tidy person today. Well, I would like to think that throughout my high school years I got better at putting clothes away and keeping a clean room, but mostly the big change happened when I finally moved out of my parent’s house. The move out to college, for most college-bound students, isn’t always a smooth one. I think a lot of college students choose to “find themselves” by setting their own rules (now that they aren’t under the roof of their parent’s house); one of the most common expressions of these rule changes, at least in my experience with roommates, is that of cleanliness.

“You can’t go out with friends until your room is cleaned!”

“Once you clean your room, then you can take the car.”

We have all heard one adage of this simple request to clean. And yet, how much of it sticks and turns into habit? If someone is constantly prodded and coerced into cleaning, does an appreciation or desire of cleaning grow? I’d say probably not.

When I moved into my first apartment in Provo right before my first semester, my mom and I spent the good part of four hours deep cleaning my room and my bathroom (and may I mention that a razor blade was even used to scrape hardened nastiness off things—I mean really people? That’s gross). Let’s quickly revisit that number: FOUR HOURS! How many college students do you think spend four hours (even with the help of another person) cleaning their room they are about to move into? Especially with the preconceived notion that a “cleaning check” happened prior to their moving in. I’d say the number is fairly slim.

Okay, so the apartment is as spotless as possible and I’m moved in. That’s good enough, right? I mean, the first cleaning check isn’t for two months! And I just spent four hours deep cleaning, remember? Let’s pause; can you take a second and wrap your brain around that. . .two months without cleaning. What? Two months’ worth of rings around the toilet; two months’ worth of dirty water build-up in the shower, two months’ worth of toothpaste spit on the mirror and in the sink; two months’ worth of hair build-up on the floor (you know what I mean ladies)—Can you picture it? Now, what would you think if I told you that is the norm in college life?

(Okay, you’re right. I’ll take a break from being a cynic and recognize that there are still people out there who are clean people. Okay, break’s over.)

Let’s return to the topic.

I’d like to illustrate my opinion by telling a few personal stories of instances I’ve had with my roommates throughout my time in college housing.

One summer day, I had gotten back from work around 5:00 p.m. to walk into a messy apartment. My previous plans to relax for the night were thrown out the dirty window as I realized I wouldn’t be able to relax in such a messy place. So, I began cleaning; I had been cleaning for about an hour when one of my roommates walked in while I was dusting the living room. She stopped and asked, “Do we have cleaning checks tomorrow?” There was a bit of worry in her voice as she asked. I replied with a “nope” and turned back to dusting. She looked perplexed at me and asked, “Well, then why are you cleaning?” HA! As if the only reason I could possibly think to clean the apartment would be that cleaning checks were the following day. I smartly replied, “I’m cleaning because our apartment is gross.” I admit, it might not have been the most prime choice of words, but I think I’ll just blame the fact that I was probably in shock.

In general, cleaning checks will mostly be at the end of every semester. There are the occasional times I have had a mid-semester cleaning check, but that’s only ever happened to me once. Now, with these cleaning checks, I have been the one (and I mean the only one) to do the cleaning. There were maybe one or two times when one of my roommates would pitch in a bit, but that was usually it. And let’s also mention that I am a full-time student, part-time employee, and single, so I try to keep my social life as alive as possible. So, it’s not like I have loads of time I can fork out to do all the cleaning. Multiple times I would get back from class at night, eat, and then clean the apartment, sometimes until 1:00 or 2:00 in the morning.

This brings me to another story. In preparation for one of my cleaning checks, I texted all my roommates to remind them when cleaning checks were (one of the efforts I would make to encourage my roommates to help me out with the cleaning). This time, one of my roommates actually replied and said she would clean the bathroom. What a blessed miracle that was to hear! I got home later that night to start cleaning, and I walked into the bathroom to see what (if anything) got done. It looked just like I left it earlier that morning. So, I texted my roommate and asked what she did. She replied that she had cleaned the bathroom. I didn’t quite believe that because the bathroom didn’t look clean, so I asked, “So, what did you actually clean?” She said she went to clean, but we didn’t have any cleaning supplies (um probably because I use them up so frequently from actually cleaning). So, she said she just rinsed out the shower and the sink and then took water and a rag to the toilet.

Excuse me? Doesn’t that just mean she turned the shower on and let the water run? Yeah, I definitely feel like that cleans the grime up really nicely.

What I don’t understand is why she wouldn’t go buy more cleaning supplies. To me, that is the most logical solution. Plus, it would have been nice to have someone else buying them for a change, since I am the only one to ever not only take the time and do the cleaning, but actually dish out money to purchase the cleaning supplies. It has taken a lot of practicing patience and love to not ask for repayment for the time and money I consistently spend on cleaning and even more patience and love to not complain about it to my roommates’ faces. Let’s just say my mom is accustomed to my frequent venting episodes.

As I have dealt with messy roommates, I have learned to keep to my room. My room is my safe place, or as my family calls it, my “sanctuary.” A sanctuary is some place we feel comfortable and at home. Well, my room is my sanctuary. I clean my room often; everything has a place and is in its place. It’s nice to be able to shut the door and close off any view of the explosion that lies beyond. Now I understand more about the hurricane rating my dad would use. I think it’s safe to say my roommates are consistently at a hurricane class eight. And yes, that is even messier than my hurricanes growing up.

One thing that confuses me most of all is the boyfriend situation—Don’t worry, this relates; I promise—So, my roommates are dating people. (Yes, and I’m not. I know. Don’t rub it in.) One thing I always keep asking myself is this, “Don’t they know? Don’t they know what they are getting themselves into! RED ALERT! Your girlfriend is a slob! The only reason you think she is clean is because I’m cleaning!” Sometimes I think about telling them how messy their girlfriend is, like I’d be doing some great public service, but I don’t of course.

One final story happened to me recently. I have long tried to keep my apartment clean and tidy to avoid any kind of gross growth or infestation. (Yes, I’ve had to purge a past apartment of something that was growing larvae in my roommate’s food—ew, let’s stop thinking about that.) The last thing anyone ever wants is to live in a place that is so messy and dirty that you start having, heaven forbid, a rat problem. Well, one of my roommates recently bought two pet rats. Yep. That happened. In all my efforts to avoid a rat ever making it into one of my apartments, my roommate welcomed two in. Needless to say, one of these

days my sanctuary won’t just be my own room, but my own apartment: larvae free, hurricane free, and yes, rat free too.